The following project explores the foresight strategies the Privy Council Office of Canada could adopt to face the growing complexities they face in providing non-partisan research and consultation to the Prime Ministers Office, the Cabinet and the rest of Government.

Growing trends in society and politics that could impact the performance of the PCO were collected. They were organized as either influences that came from within or external to government. They were then also organized into clusters that revealed underlying themes. 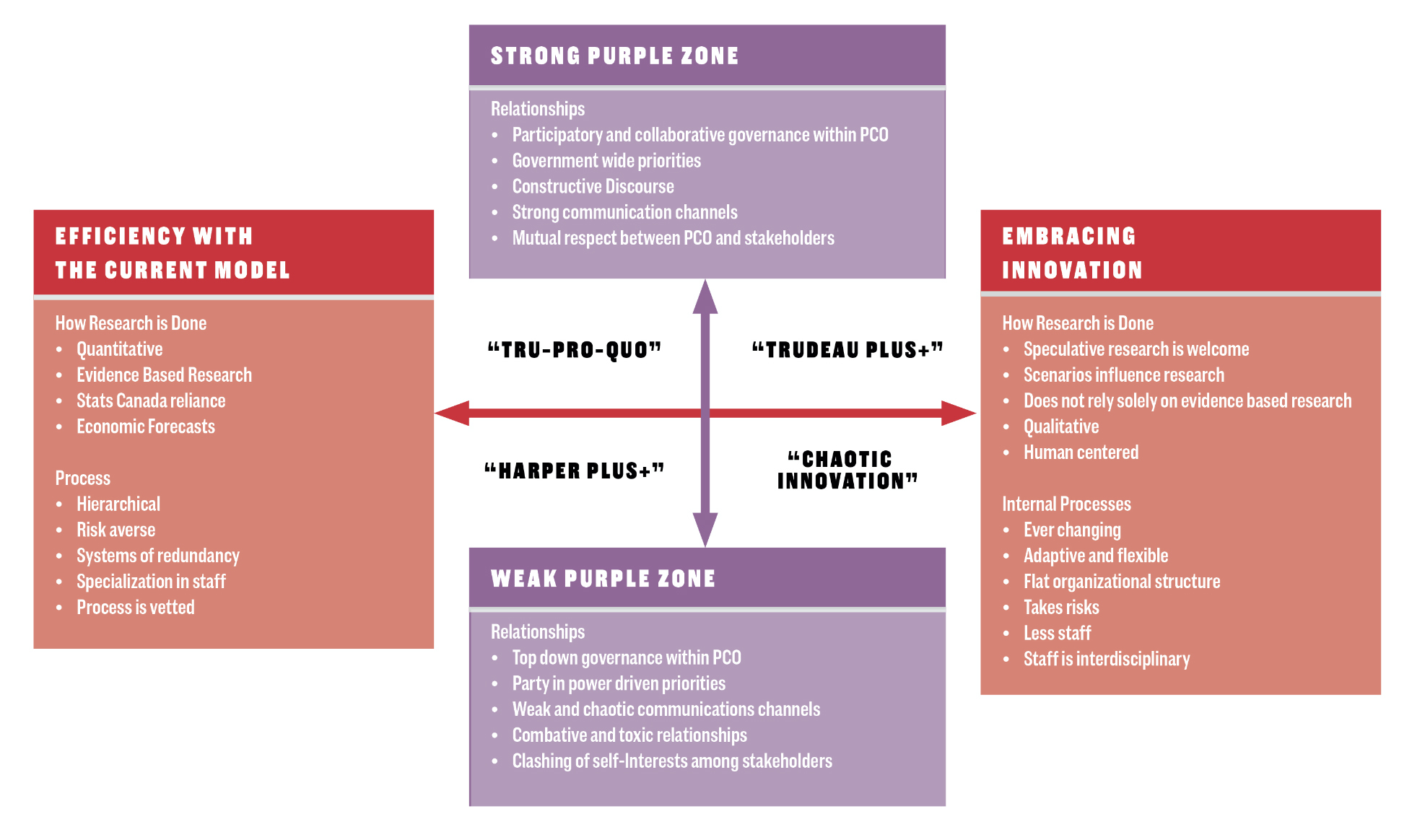 The PCO is a stable, persistent, central component of Canadian governance. The axes selected offer both a reflective historical framework of PCO practices, and a speculative framework for how the PCO could operate. On the horizontal axis, the left represents hindsight and data focussed / risk averse decision -making. This pragmatism is an important temperament for governmental decision-making and is central to operational governance through changing political mandates. The right side of the horizontal axis represents a hyper progressive approach to innovation, offering the most extreme potential for disruptive and transformational foresight oriented innovation and change.

The vertical axis speaks to the level of balance and inclusion of decision-making and leadership. These spectrums are demarcated by a highly inclusive decision making protocol at the top where stakeholders are consulted at all levels, and feedback is included in decision making, compared with the bottom where benevolent-dictatorship-style non consultative executive decisions. For relevance to today’s political reality we have utilized Trudeau and Harper as descriptors  of leadership styles. 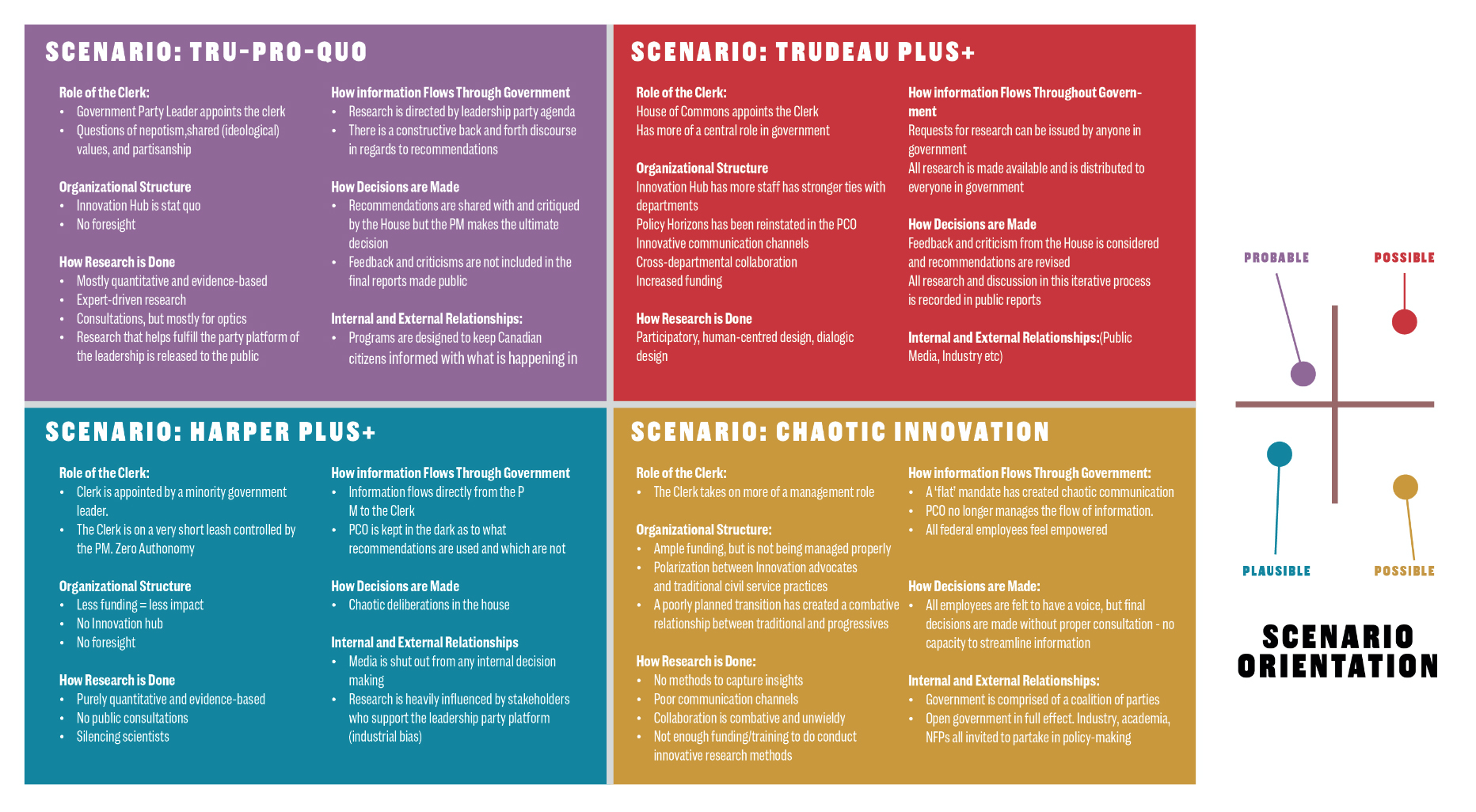 Each of our scenarios involved a comprehensive examination of six areas of organizational impact including:

In choosing the scenarios we were seeking both provocative and informative perspectives to offer a strong framework for our wind tunneling process.

In a previous wind tunneling exercise, we found difficulty understanding how the PCO would implement some of the strategic options we created. We realized that this was the case because some of the options considered involved Constitutional changes, where the PCO ultimately has no say in. In examining the landscape of influence that the PCO resides in we found that the PCO ultimately answers to the PMO who controls most of the power to make structural changes in government. However, the PCO does have the power to change how it distributes its resources, how it manages its relationships and how it fosters its internal culture. It is from this frame where we redeveloped new options to wind tunnel.

It is also important that whatever strategic options we consider must be robust enough to succeed in most of the scenarios. Due to the risk averse nature of government, the tight restraints around government spending and the lack of agility would be unwise to recommend strategies that are of the gambling, multi-layered and flexible variety. 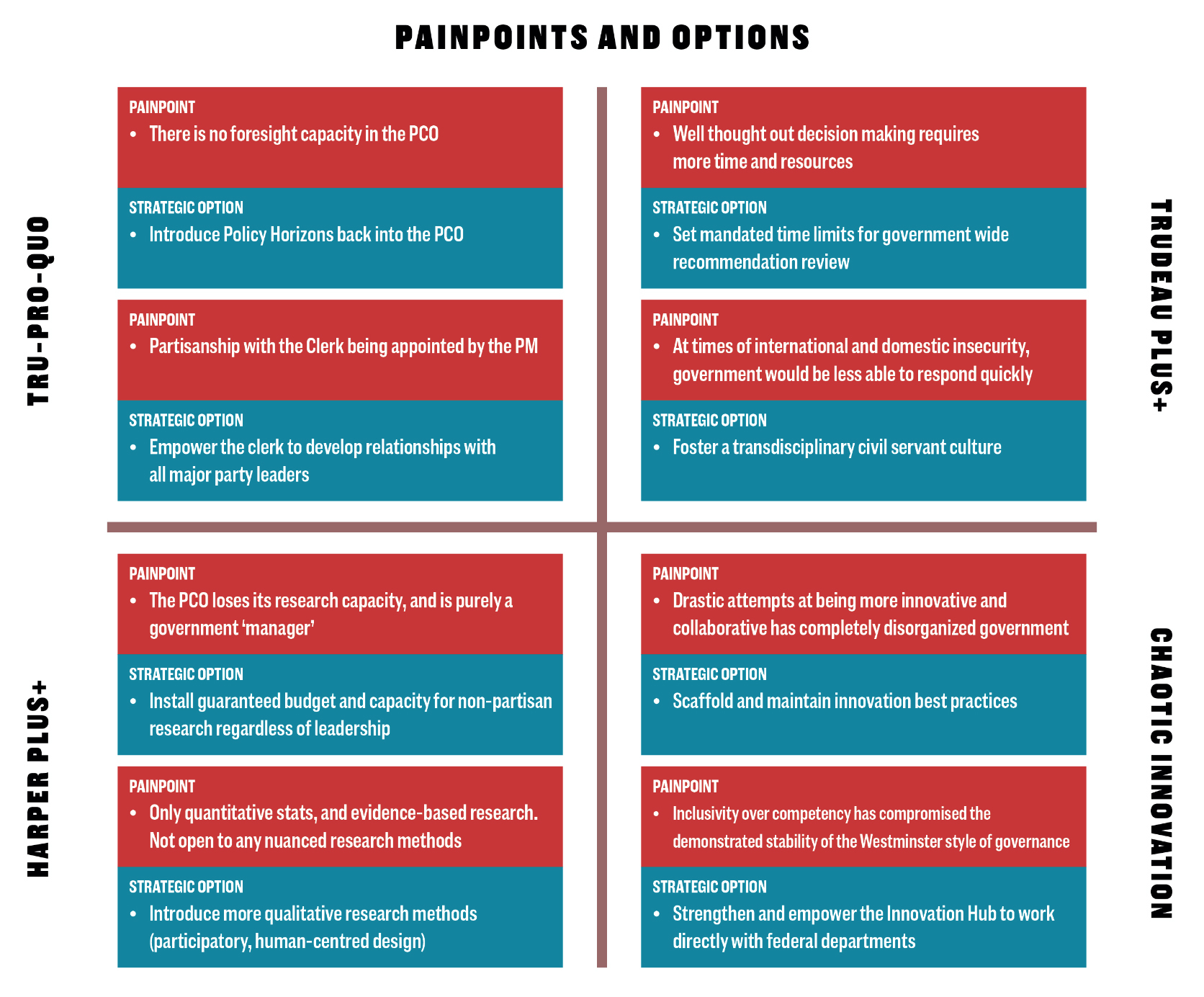 Each of the scenarios were explored deeper, uncovering pinpoints and bottle necks the PCO would face given the future hypothetical environments. To address each pain point, strategic recommendations were made. 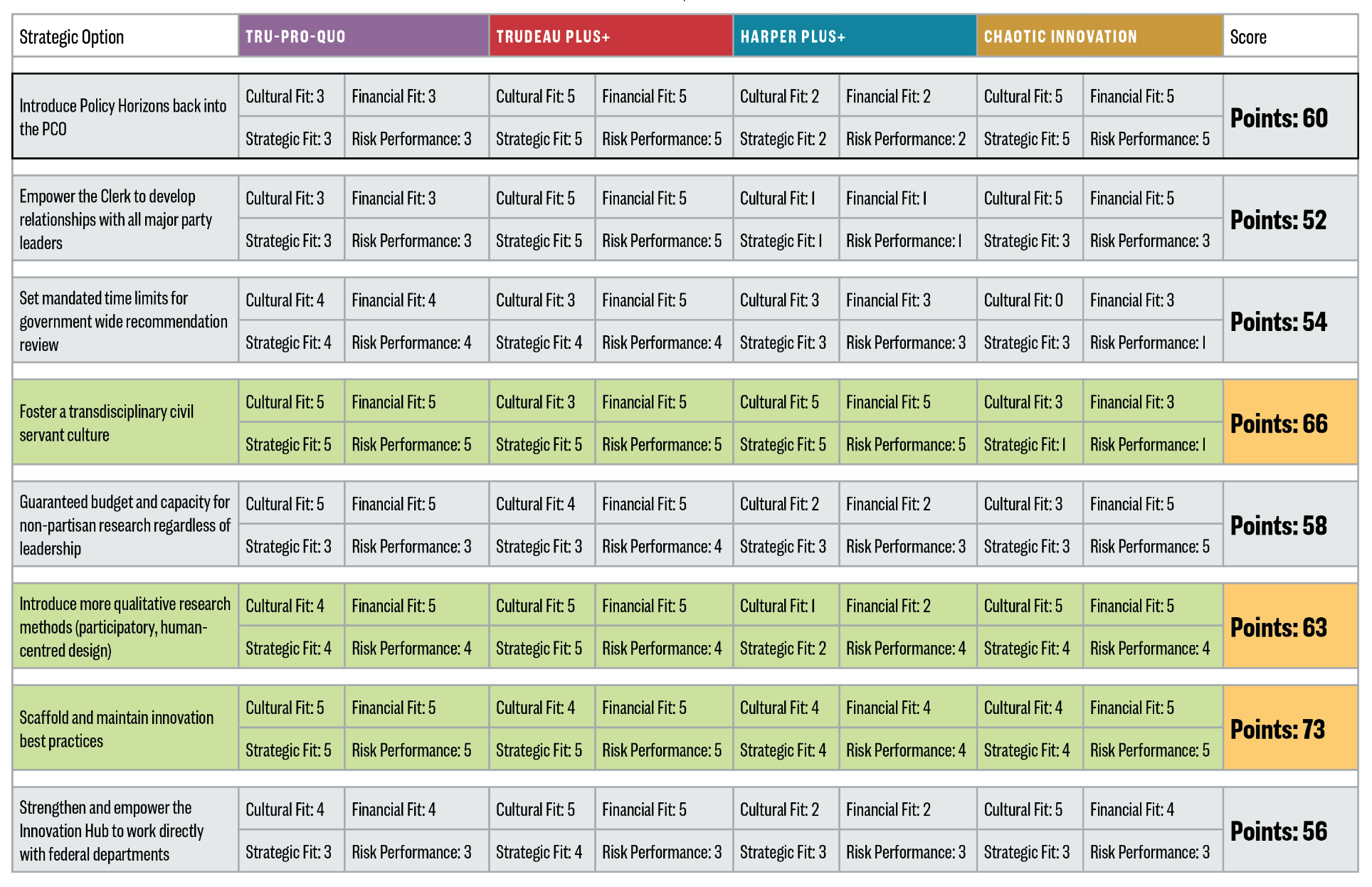 Each of the strategic options were then windtunneled through each scenario through the following filters or "fits":

Strategic Fit Criteria: In order for a strategic option to succeed strategically it must fit within not only the PCO’s mandate but that of its primary stakeholders as well.

Financial Fit Criteria: In order for a strategic option to succeed financially it must be valuable enough for the PCO to reallocate its resources or have the PMO boost its operating budget.

Cultural Fit Criteria: In order for a strategic option to succeed culturally, healthy, strong cooperative relationships between key players in the activities engaged in by the PCO.

Risk Performance: In order for a strategic option to be deemed unrisky, they need to make sure the PCO maintains a level of stability, not enter conflicts of interest, not make PCO employees vulnerable or decrease the effectiveness of the PCO to deliver on its major priorities.

While we do believe our strategic recommendations to be a strong fit for the PCO, they do not come without risks and assumptions. These recommendations were carefully chosen with an important caveat, electoral cycles. Historically, federal governments have been held by liberal and conservative governments, typically with each successor’s policies strongly opposing the party in power’s platforms. We should not let history drive our recommendations, but it is important to take these facts into consideration. Thus, our recommendation should focus on organizational and cultural change. 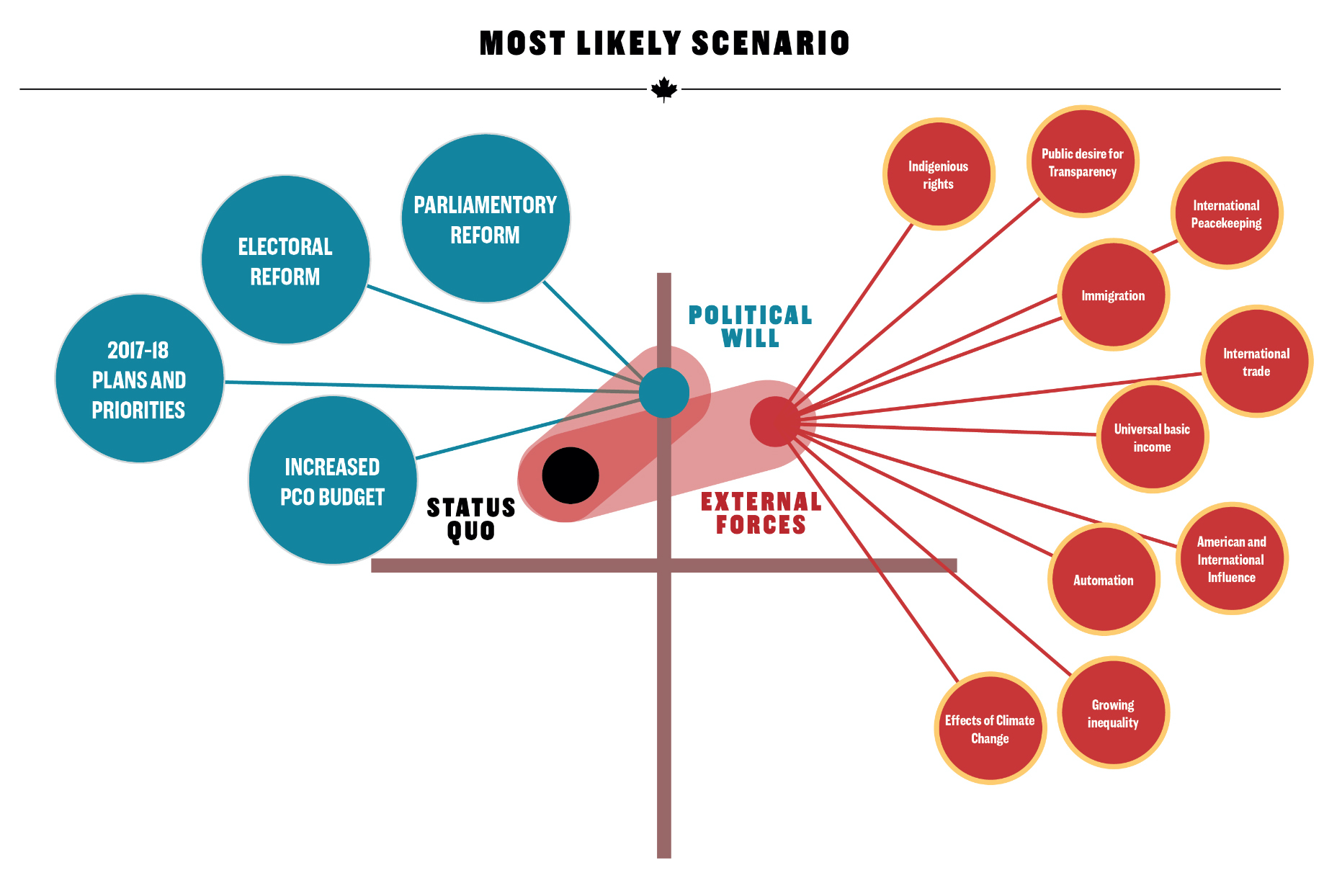 Looking at current trends and signals we can see the PCO moving into two different directions that carve out a potential zone of a plausible future.

First we see a future Canadian government that, on its own political accord, shifts towards a more collaborative purple zone with a stronger focus on innovation and foresight. We are seeing hints of future this with things like parliamentary and electoral reform where the PMO is considering experimentation on how government could be run. We are also seeing hints of this future with the increased PCO budget where in 2017, they’ve been given more funding compared to any other year. We also see hints of this future with the latest 2017-2018 Plans and Priorities (now named the PCO Departmental Plan) which now for the first time includes a future facing focus (earmarking monies until 2020). It is also it's also much more digestible, and easier to glean information in comparison to previous years.

Secondly, we see a future Canadian government that, against its own accord, will be forced to adopt new ways of doing things. Because of rising external global complexities listed earlier, the Canadian government will have no choice but to adopt research and decision making practices that make it more responsive and prepared for the future. This, in turn, might make things somewhat harder for the PCO to control.

The most likely scenario is then the “triangulation of area” between the present status quo and the two plausible futures that we see emerging in the next 4 years. 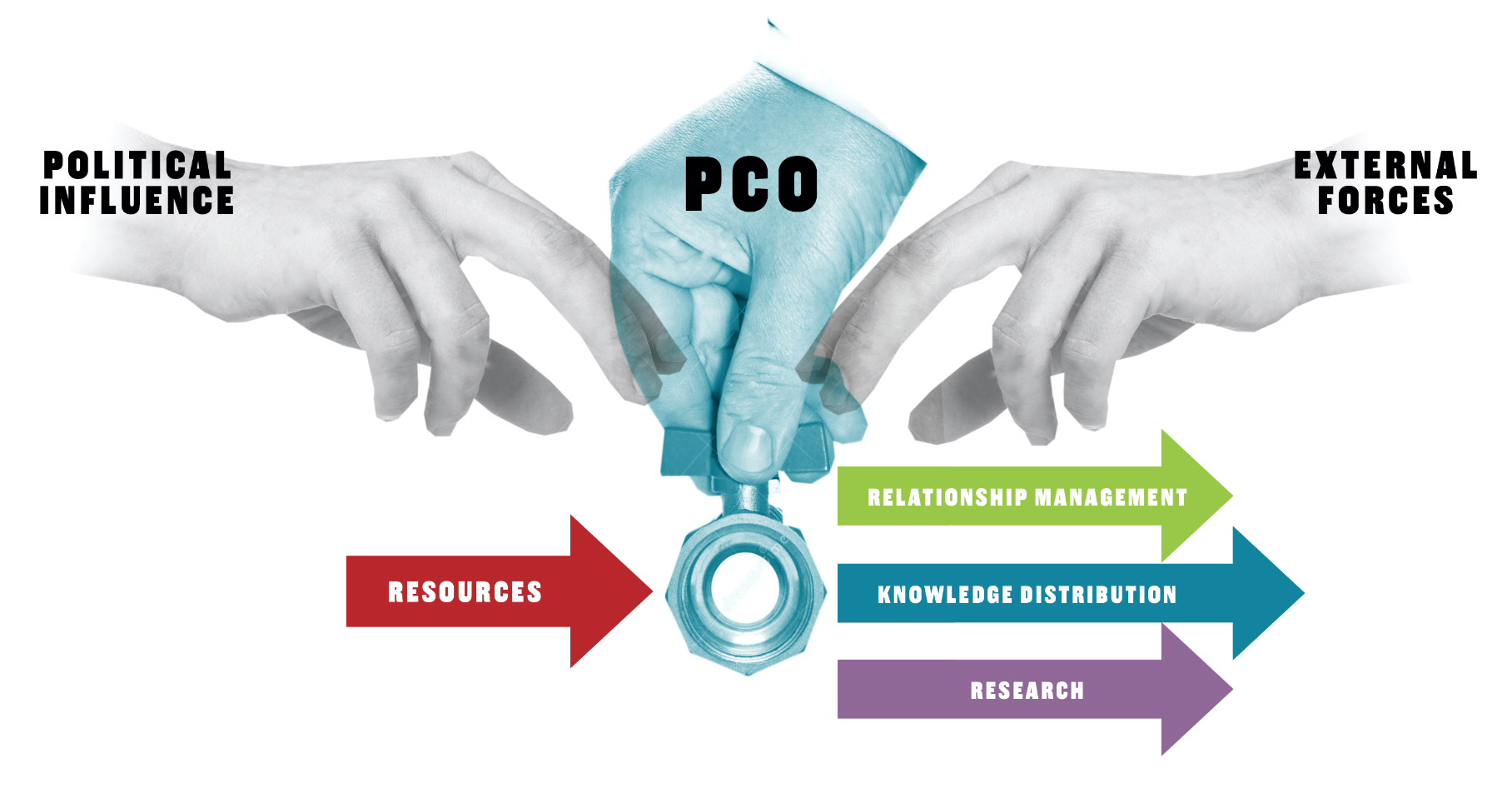 Ultimately the framework for these strategic recommendations for the PCO are built around the development of a stable scaffold and organizational culture which can deliver persevering value-gap solutions which have the capacity to endure governmental change. Which deliver sustained checks, balances, and innovations frameworks that impact upon the lasting value of delivering an efficient public service, and non-partisan advice to government. These strategies will increase the efficiency and agility of the organization in meeting its current mandate and responding to the increase of emergent issues resulting from hyper-technological advancement, accelerating climate change, and issues connected to unprecedented global population growth.